Minecraft User Statistics: How Many People Play Minecraft In 2023?

Nothing has surprised the gaming world more than the rise of Minecraft.

The simple gameplay and easy creative tools have meant that Minecraft has amassed more than 141 million active players – both young and old.

The average game has a shelf life of about 2 years.

But that’s not the case for Minecraft.

Even as the game has aged, both new and old players continue to flock to the platform to create almost anything they can imagine.

These Minecraft user statistics show just how big Minecraft has become and why it’s still so popular today.

Minecraft has a very interesting history.

Here’s what you need to know:

Minecraft launched its alpha round on PC back on 17 May 2009. Just over 2.5 years later on 18 November 2011, the full game was released to the general public.

Although the time between the alpha launch and full release was significantly longer than most games, this allowed developers to perfect the game before release.

This was a big reason that Minecraft experienced success straight out of the gate.

Since then, it has only grown from strength to strength.

Where is Minecraft from?

Minecraft was developed by Markus “Notch” Persson in Stockholm, Sweden. Notch was Markus’ gaming name while playing on the Minecraft platform.

In 2014, Microsoft purchased Minecraft for a massive $2.5 billion through Xbox Games Studios. This was 20x the earnings that Minecraft was bringing at the time.

While most people thought it was a crazy valuation…

Microsoft and Xbox Games Studios saw how big Minecraft could be. This investment into one of the biggest games in the last decade has paid off in a big way.

This has made Minecraft more accessible to different players and allows you to play it on whatever device you prefer.

It was a huge hit in acquiring millions of players to the game.

Minecraft’s growth made a massive splash in the gaming industry as developers realised how big a simple game could be.

These are the key Minecraft user statistics you need to know:

Minecraft’s users are not who you think they are.

The game has attracted a diverse group of players ranging from young children all the way through to older adults. Here’s the full breakdown of Minecraft user statistics.

In fact, the average Minecraft player is a 24-year-old male. Who knew, right?

But younger players still dominate the Minecraft servers. And by younger, I mean that Minecraft has children as young as 3 years old playing the game.

This is despite the fact that Minecraft has been rated suitable for children 7 and above.

This statistic only increases when looking at the age group of 6 to 8.

Part of the success of Minecraft is that you can play with friends.

80% of children play Minecraft in the company of their:

The multiplayer aspect means you can team up with other players to create your own designs and shape the world around you.

But when it comes to adults, this changes.

50% of all Minecraft players prefer to play the game alone. Only 11% of parents regularly play Minecraft with their children.

Gaming and streaming YouTube channels have exploded over the last 5 years.

Minecraft has become part of the hype, with thousands of players live streaming their Minecraft playing sessions.

When you compare this to the girls, the percentage drops to just 9%.

Americans Are The Most Active Minecraft Players

Minecraft is a truly global game with players from all over the world.

But the United States has the most players with 21.21% of daily usage recorded coming from the US alone.

That’s about 3.5x the next biggest country on the list and about the same as the next 4 countries combined.

Daily usage recorded means that of all the time played on the Minecraft game that day, each country has players that consumed a percentage of it.

Here’s the full breakdown of the top 5 countries:


Interestingly, of all British boys that play Minecraft, 22% of them said that Minecraft was their favourite game.

It’s clear that Minecraft has not only become a big game, but it has developed an extremely loyal following of players who play it regularly.

How many people play Minecraft?

Since the original release of Minecraft back in 2011 the game has amassed 141 million active players worldwide.

This is the total number of Minecraft monthly active users by month and year:


In less than a year, from May 2020 to March 2021, the game increased in monthly active players by about 14 million. This large increase is likely due to the COVID-19 pandemic. Not only that, but the mobile version of the game also had a significant impact on the increase in active players.

This was mostly attributed to mobile making the game more accessible to players on devices like tablets and phones.

You could play it wherever and whenever you wanted.

Minecraft has a lot of players.

But does it make any money?

Remember that Microsoft purchased Minecraft back in 2014 for a massive $2.5 billion. Here are the Minecraft statistics on revenue.

2014 was the worst year in terms of revenue. It dropped to $165M in global annual revenue just as Microsoft purchased the game. But in 2021, Minecraft generated $380M.

This is the annual global revenue generated by Minecraft from 2012 to 2021:


Despite Minecraft growing in active users year on year since 2016, revenue is far less consistent. Minecraft peaked in 2018, finishing the year with $500 million in global annual revenue.

The pandemic again seemed to be the biggest reason that Minecraft was able to increase revenue in 2020.

Without the pandemic, it’s possible that Minecraft sales would have decreased.

Since Microsoft purchased the game back in 2014, Minecraft has generated more than $2.8 billion in sales revenue to date. 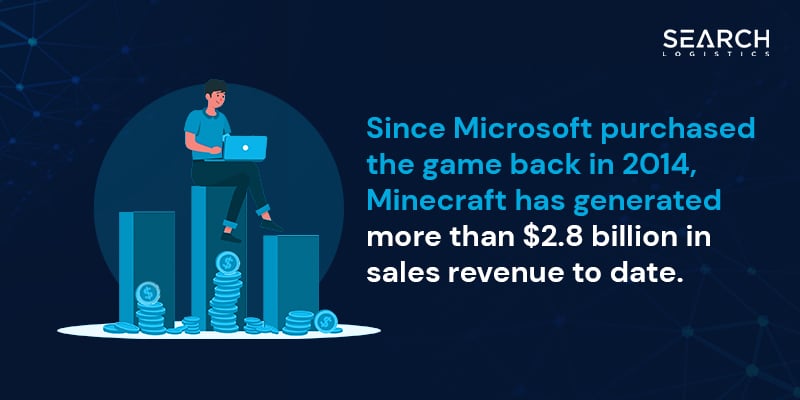 They have continuously been able to reinvent the game through the years without changing fundamental elements of what makes it popular.

If Minecraft can continue to develop, it will likely continue to be popular amongst players for many years to come.

Mobile revenue is important to Minecraft.

Put simply – Mobile is an essential channel for Minecraft.

So, below you’ll find the full breakdown of global mobile revenue generated by Minecraft from 2015 to 2021.


Mobile revenue has generally grown year over year except for 2016. Mobile revenue was part of the reason that Minecraft’s total global sales doubled from 2014 to 2015. The COVID-19 pandemic also substantially affected mobile revenue from Minecraft, increasing by over $30 million in 2020 alone.

It’s estimated that about 30% of Minecraft players use the mobile version of the game regularly. Crazy, right?

Minecraft is available in both digital and physical formats. But what has made Minecraft so popular is the ability of Microsoft to continuously update the game.

This has kept the game fresh and ensured that it has been adapted for new players.

Here are the Minecraft user statistics on the total number of sales worldwide since its release in 2011.

Minecraft has recorded worldwide sales of over 238 million units since its release.

What does that mean?

Minecraft is one of the best-selling games of all time. In just over 6 years, the game has been able to more than double its sales and increase active users. This is impressive for any game as typical games have a shelf life of about 2 years.

This is the cumulative number of copies of Minecraft that were sold worldwide from 2016 to 2021:

The pandemic boosted sales of Minecraft by up to an estimated 65%.

Minecraft China Edition is a specialised version of Minecraft.

It was developed in collaboration with the major Chinese software conglomerate NetEase specifically for the Chinese domestic market.

Since its release in 2017, it has become a top-rated game in China.

The game has been downloaded more than 425 million since its release date.

This is the complete number of cumulative downloads of the Minecraft Chinese Edition from 2017 to 2021:


For the first 3 years of the Minecraft Chinese Edition, the game downloads doubled yearly until 2019.

While the Chinese game is free to play, there are in-app purchases that Minecraft users can make. This is how the game makes money in China.

There you have it.

Minecraft is a one-of-a-kind game that has gone on to be one of the best-selling games ever. It has only continued to grow in terms of active users over the years and attracted a diverse demographic of players.

The game is likely to continue to grow in the future.

Although the growth rate has slowed, Minecraft has been able to develop new features without changing the core gameplay.

This, combined with the game’s social aspect, has proved to be a winning combination for Minecraft players.